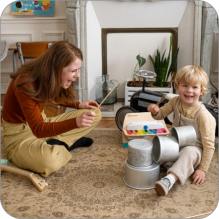 Where to celebrate the Fête de la Musique this year? And where are the best concerts on June 21st?

If you're still looking for the best place to celebrate World Music Day this year, look no further: Mômji has gathered the best spots to see the artists perform this year!

But where does this tradition come from and why is it celebrated on June 21?

In France, it was Jack Lang, the Minister of Culture in 1982, who introduced this new custom that now includes more and more musical genres and gives a chance to budding musicians.

The World Music Day - as it is known internationally - is celebrated in more than 100 countries each year on the summer solstice. It is the longest day of the year and therefore the perfect opportunity to celebrate music and artists all day and all night! The French gather every year to attend the different festivals and concerts, which are 100% free !

Cultural centers, museums and concert halls welcome you every summer with lively performances. But to take advantage of the good weather, you can also attend open-air concerts: bars and associations can set up ephemeral stages on the public inner city roads to celebrate this unmissable musical event.

After several years impacted by the COVID-19 and the impossibility to gather in groups, the 40th edition of the Fête de la Musique is therefore to be celebrated with your community (while respecting safety and health measures, of course)!

In the French capital, it is not uncommon to see artists performing all over the city during the music festival, and especially in places that cannot be missed such as the quays of Paris or the Pyramid of the Louvre Museum.

Let's go to the Irish Cultural Center of Paris to hear hip-hop performances from artists coming from 3 different countries: France, Senegal and Ireland! Arrive at 6pm to discover Doctor L, the well known Franco-Irish composer, who will animate this musical melting pot.

If you are in Brittany in June, you can divide your time this Tuesday June 21 between the 3 stages in the center of the Breton capital:

And 2 others in the outskirts of Rennes, to be able to party in the open air :

You will be spoilt for choice!

Why not come and party in a castle for the music festival? The Château de la Buzine in Marseille welcomes all music lovers for an exceptional … and a rock and roll evening! The band OLD SHOT will come to close the Guilt'Art Légendes exhibition, which has amazed the public with all the guitars lent by the greatest French and international musicians, such as Lenny Kravitz, Eric Serra, Francis Cabrel, Louis Bertignac, Thomas Dutronc, Billy Gibbons, Cyril Roger Shakaponk, Sean Lennon, and many others!

Find many musical animations in the concert halls of Lille but also in the bars and in the streets of the biggest city of the north of France! But if you are looking for something more eclectic, these unusual places are made for you: the CHU opens its doors to musicians for this day in music as well as the Saint-Sauveur train station which will see many artists take the stage! To celebrate surrounded by the culture of Lille, nothing better than a concert at the Museum of Natural History or a performance at the Citadelle of Lille!

The Fête de la Musique is coming to Lyon, and more precisely in the courtyard of the gallery of the Institut National Supérieur du Professorat et de l'Éducation! For the fourth year, you will be able to meet the Debussy Quartet, this group of four musicians who make the public dream with their string instruments. This internationally renowned group will perform on Tuesday, June 21 in the heart of Lyon's 4th arrondissement.  Not to be missed!