Where to celebrate Saint Patrick's Day in Paris 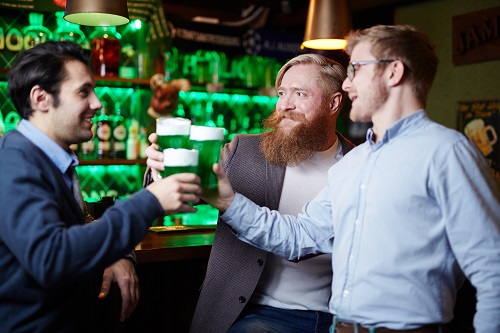 Whether you an Irishman or Irishwoman in Paris, or just looking for a party, St Patrick’s Day is one of the most loved celebrations by English-speakers.

Held every year on the 17th March, the date of Ireland’s patron St Patrick’s death, it’s a day to celebrate Irish heritage and culture. Only a public holiday in the Republic of Ireland and Northern Ireland, it’s a normal working day for everyone else on the continent – but that doesn’t stop Paris partying!

So, if you’re in the French capital, get on your green glad rags and head on down to one of these 10 bars.

Corcoran’s Irish Pubs are situated all across Paris and are hugely popular with the international community. At the heart of the city’s 2nd arrondissement, Corcoran’s at Grands Boulevards is a sizeable establishment offering a special St Patrick’s Day night with booking available now.

Hide Châtelet is a pub, turn club, that is throwing at St Patrick’s Day extravaganza in Paris.

From 5 pm, special pints of green beer are as cheap as €3 with 2-litre pitchers on offer for €10 during the happy hour. Later on in the night, expect two floors with DJs playing all the hits and souvenirs being given away. The best thing? Entry is free all evening!

The Green Linnet is popular at all times of the year with its weekly quiz nights and reasonable prices. It was opened all the way back in 2003 by a Cork native and is a good bet if you’re in search of an authentic St Patrick’s Day.

If you’ve been out for any calendar festivity in Paris, you might well have partied in California Avenue. The club hosts themed nights throughout the year and won’t disappoint this St Patrick’s Day.

An ‘Afterwork Party’ starts from 5 pm for those leaving the office, whilst a ‘Party Club’ kicks off at 9 pm for those looking to dance. California Avenue is another bar offering a special green pint of beer too!

Another member of the Corcoran’s family, this branch is located in St-Michel.

If you’ve been before, you’ll know St-Michel’s popularity amongst the international community for its cheap eats and drinks. If you’re looking for a lively area to hop in and out of bars, why not start here?

Sitting as a neighbour to Paris’ famous Moulin Rouge, O’Sullivans can look a funny member of the street at times.

Nonetheless, it’s a hugely popular haunt. Known for live music, clubbing and sports action, it’s everything you need from an Irish bar.

Not a pub in the same way as the others on this list, the Irish Cultural Centre is a different option for those still wanting to make the most of St Patrick’s Day, but keen to avoid the typical bar.

During the day, there’s special burlesque and Irish dancing shows, as well as activities for kids. Later in the evening, an Irish concert from a visiting band looks to be a lively affair, although booking in advance is recommended. Enjoy a student discount on the ticket.

You can trust Paris’ Hard Rock Café to do something quirky for any big festivity! A Guinness and bacon jam cheeseburger and St Patrick’s Day milkshakes will be on the menu, whilst you’ll be able to enjoy a pint of beer as usual.

Backpacker bar which attracts a raucous international crowd, Belushi’s is throwing a St Patrick’s day special with live music, DJs and a whisky happy hour. Another different option for those fancying something different from a traditional Irish pub.

Another Irish haunt in the lively area of St Michel, at The Galway you’ll always be greeted with a smile… and normally an Irish bartender too! It’s a smaller bar, so could get busy, so think about heading down early.

If you’re an English-speaker in Paris looking to socialise with an international crowd, then why not join the Mômji community? As well as offering fantastic, part-time jobs, we bring together hundreds of internationals in Paris. Join the group now and apply online!

A DAY WITH MARIANNA, A CREATIVE MÔMJI NANNY!

Mômji presents a typical day of a creative nanny…

What are the traditions for the end of the year…

To be grateful : a Thanksgiving activity for children

Teach kids to be thankful at Thanksgiving! With…

A DAY WITH MARIANNA, A CREATIVE MÔMJI NANNY!

Mômji presents a typical day of a creative nanny…

What are the traditions for the end of the year…

To be grateful : a Thanksgiving activity for children

Teach kids to be thankful at Thanksgiving! With…