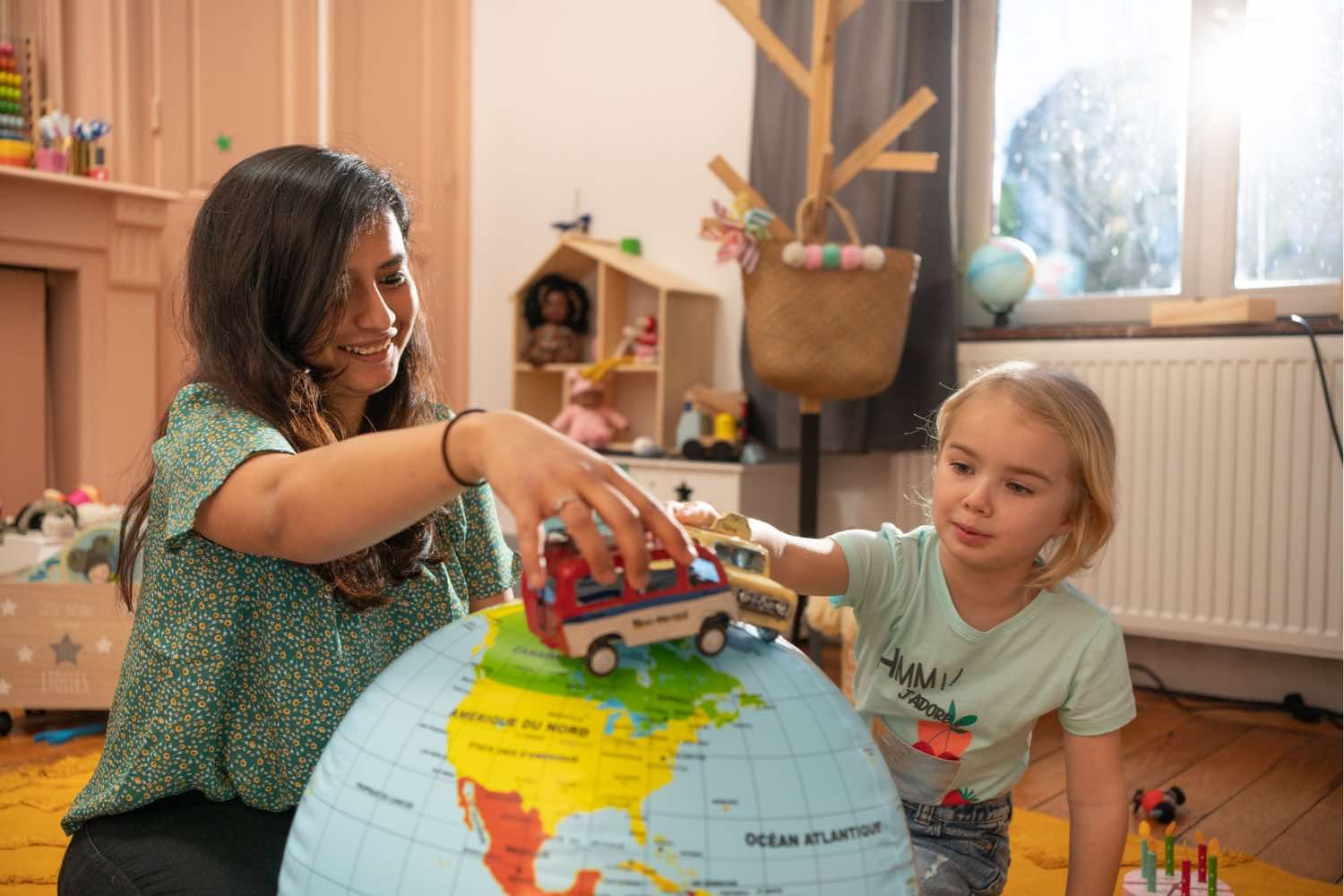 Are you still hesitating to teach your child a foreign language? Do you think he / she may not be ready to assimilate new words?

At Mômji, we connect thousands of bilingual nannies with French-speaking families every year.

The demand for childcare in a foreign language is stronger than ever.

Choosing the Bilingual option is making the decision to introduce cultural immersion from a very young age.

This is an opportunity for your child to get started, and here are five reasons why.

Children are not like students: simply because they do not have so many things to remember! At a young age, the brain is a real sponge, absorbing new knowledge. The earlier a language is introduced, when the mind is not yet "cluttered", the easier it will be assimilated.

Kids will develop their pronunciation in particular, because they will pronounce the new sounds learned without questioning themselves, in opposite to an adult, who has been familiar with certain sounds for years.

The skills that children will be able to acquire are numerous and can be applied to different situations throughout their lives.
Important: the second acquired language will not encroach on the first: on the contrary, they will "feed each other".

There is no risk of overloading the brain of the young child. His/her brain likes to have fun, otherwise it fades, like a plant in the absence of light and water.

Learning a new language also means learning a new vocabulary and, as a result, developing the cognitive abilities of the child. Teaching a foreign language will therefore have the same beneficial effects than reading, for example.

Early language skills will help your children in their school and career path.

A foreign language mastered, these are increasing chances for foreign studies, but also professional opportunities. International profiles will always appeal to recruiters.

# 3 A CULTURAL EXCHANGE AND OPEN-MINDED KIDS

Choosing babysitting in a foreign language is not just about learning new words for your child: it's a real cultural immersion. Very soon, he / she will be familiar with diversity, which will serve as a window on the world.

A young child who learns another language becomes a bearer of otherness and diversity, and thereby easily acquires an open-minded attitude toward other cultures and ways of thinking.

This is one of the main advantages when using a bilingual nanny. French families hope that the nanny will incorporate aspects and stories from her home country to broaden the child's mind and make him/her aware of world’s diversity in which he / she lives.

It is good that cultural exchange works both ways. As parents, you are also ambassadors of French culture to your child and to his/her nanny. Choosing a foreign nanny is also choosing to give them an immersion in the culture of the host country.

# 4 DEVELOP THE COGNITIVE ABILITIES OF THE CHILD

In a 1992 study (Riccardielli), children were presented with a brick or a can. Then, they were asked what they could do with it.

The performances were then measured in terms of the number of different responses and the degree of originality and elaboration. Fluent children have significantly outperformed children with only one language.

Other benefits have been observed in the first category of children:

• Communicative sensitivity (e.g. explaining the rules of a game to peers),

• And a better ability to find your way around the space.

# 5 BABY-SPEAKING, THE SOLUTION TO INTRODUCE YOUR CHILDREN TO A FOREIGN LANGUAGE!

Your child can learn two or three languages as easily as one, if he/she starts early! But beware, he can also forget them quickly if he does not use them continuously during his/her childhood.

After 7 years, the maturation threshold of the brain will no longer allow him to intuitively learn a language. He/she may learn new languages, but they will not be considered as mother tongues.

BONUS: THE RECIPE FOR BECOMING BILINGUAL

2. Dip it in a foreign language bath several times a week,

3. Let macerate for a few years,

4. Take it out, listen to it, congratulate it,

5. Return regularly during the course of life and water without moderation.

"THERE YOU GO!" could conclude the chef, proud of his/her work.

This is why Mômji offers a chilcare service in a foreign language.

The employees are native of 7 different countries and will be able to talk to children directly in their native language: English, Spanish, French, Chinese, German, Arabic or Russian.

Teach them patience with our new pedagogical and…

How to celebrate Thanksgiving during the lockdown in France ?

Enjoy your Thanksgiving in France despite the…

As a parent, you still hesitate to learn them…

Teach them patience with our new pedagogical and…

How to celebrate Thanksgiving during the lockdown in France ?

Enjoy your Thanksgiving in France despite the…

As a parent, you still hesitate to learn them…