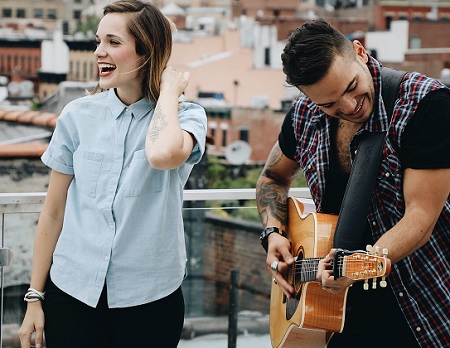 The Fête de la Musique in France, or World Music Day globally, is an annual celebration of all kinds of music that takes place on June 21st. The inaugural event kicked off on the day of the summer solstice in Paris in 1982, spearheaded by Minister of Culture Jack Lang, and is now celebrated by a whopping 120 countries across the world!

So, why is music so important? Creating melodies to convey emotion is something that humans have been doing ever since our very first steps in evolution.

Now, in the modern-day, scientists have conducted in-depth research into just why music is such a fundamental part of our existence.

There are direct links between music and reducing anxiety, in sports studies it has been found that listening to music helps boost training performance and it’s even been noted that the repetitive elements of rhythm help our brains enhance memory!

On top of all of that, the music industry is a booming economy worldwide with the recording industry alone estimated to be worth a whopping $18.1 billion. It also fosters a sense of community and is a fantastic learning tool (we’ll touch on that more later!).

Normally, the Fête de la Musique in France sees pop-up concerts span cities and people fill the streets for a sing-a-long. Indeed, that was the plan by organisers this year, although public events have sadly had to be scrapped given the COVID-19 pandemic.

Nonetheless, there are still plenty of ways to celebrate National Music Day 2020 online this year!

Tous ensemble pour la musique will be going ahead at an, albeit empty, AccorHotels Arena this June 21st. The show will be broadcast live on France 2 and will feature performances from revered acts such as Patrick Bruel, Christine and the Queens, Catherine Ringer and many, many more.

Elsewhere, France 5 are spending an evening dedicated to music, France 3 will put on a Symphonie pour la vie concert with proceeds going to charity and Louis Bertignac is hosting a ‘rock marathon’ live on Facebook on the 21st.

How can I celebrate National Music Day 2020?

If the live stream events being provided by organisers don’t tickle your fancy, then there’s still plenty you can do to mark National Music Day 2020. Here’s a short list of ideas and activities you might like to try:

•    Desert Island Discs – an idea popularised by U.K. radio channel Radio 4, the programme sees guests pick five tracks to take to a desert island. So, if you were stranded and could only listen to five songs ever again, what do you think they would be and why?

•    Soundtrack of your life – In a similar vein to Desert Island Discs, can you pick the five tracks that soundtrack your life? Perhaps one from childhood, one from your senior school years and one from college? It’s a fun game to reminisce on times gone by!

What’s going on in the music industry right now?

It will come as no surprise that artists across the globe have had to cancel live shows and, consequently, delay the release of music due to COVID-19. However, despite the hardships, there has been a real sense of solidarity that has come from singers taking to social media to perform live shows from their bedrooms and interview one another for fans to tune into.

One French name who has made waves worldwide with her, at one-point daily, live streams is Parisian Christine and the Queens. Giving her trademark quirky sets for all to see, the singer has seen her fanbase grow whilst on lockdown.

Other exciting news in the industry came last month as stars Doja Cat and Nicki Minaj made history as the first collaboration by two female rappers to reach the top of the Billboard Hot 100. Some singers, such as Charli XCX, have also challenged themselves to write, record and release an album whilst in lockdown – doing so to critical acclaim!

When you think of music, perhaps your role as a Language Ambassador with Mômji isn’t the first thing that comes to mind. However, the role of music in language learning and education is of huge importance.

Scientists have found countless links between music and language acquisition over the years. Here are some facts that the team over at Altissa describe:

•    When we sing, our mother tongue accent is less evident than when we speak as we focus more on sounds and tone.

•    Music helps us better take-in new vocabulary – especially informal expressions that we don’t necessarily come across in the classroom.

•    Music helps memory and singing new words helps them to stick in your brain longer. We all learnt the alphabet by singing, for instance!

•    For children, scientists have proved that youngsters who listen to multiple languages have a better ‘linguistic sensitivity’ later in life.

So, as we celebrate National Music Day 2020, be sure to also think how to incorporate music into your sessions at a Language Ambassador. It’s effective, fun and a fantastic asset at our disposal!

Read our article about songs in English to practice with children.