This weekend, mothers will be honored throughout France. Just like each country's national holiday, Mother's Day celebrations, dates and customs vary around the world.

Contrary to popular belief, Mother's Day is a long-standing universal tradition: as early as antiquity, the Greeks celebrated the goddess Rhea, mother of Zeus, considered the great mother of the gods, as spring approached! In the 5th century B.C., the Romans also paid tribute to mothers, and to women in general.

The idea of an official celebration paying tribute to mothers began to emerge during the reign of Napoleon, but took on its full importance at the end of the 19th century, and during the post-war period, during which France experienced a significant drop in its birth rate, to celebrate the women who participated in the material and demographic reconstruction of the country.

Mother's day around the world

In France, Mother's Day is usually celebrated on the last Sunday of May, unless it coincides with Pentecost.

It is customary on this day to give our moms flowers, cards, chocolates ... or even bring her breakfast in bed.

In Spain, "El dia de la madre" is a day of rest for mothers! Traditionally, the whole family goes to a restaurant to enjoy a hearty meal. The restaurant owners also play the game: they usually offer flowers to the Spanish moms present on this day!

In Thailand, we traditionally celebrate the birthday of Queen Sirikit, considered as the mother of all: fireworks, illuminations, decorations and parades are de rigueur to pay tribute to her, as well as to all mothers! For the occasion, the subway is free for the mothers accompanied by their children!

In Australia, Mother's Day is based on a nice gesture from 1924, when a young woman gave gifts to women with children in the homes of her community. Giving gifts is a tradition that has been kept, and the chrysanthemum is the symbol of this Mother's Day, mainly because its name contains the word "mum": the "chrysanthemum". Australians love to gather around a barbecue and enjoy the famous Australian Pavlova: a famous cake usually made of meringue and whipped cream.

The perfect opportunity to creatively reinvent these everyday objects 😊. 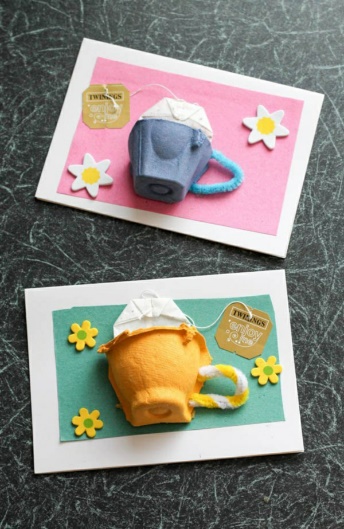 To make this card, you will need:

- a blank card ou sheet of paper folded in half

- some sheets of colored paper (alternatively, draw a rectangle on your card, and let the child color it in the color of his choice)

- glitter, paper flower, and whatever will allow them to personalize and brighten up their card

The child will have to cut the egg box into pieces and paint it with the color of his choice. After a necessary drying time, he will have to make two small holes in the box to thread the pipe cleaner wire.

Then, he will glue a colored paper to make a background, before adding his egg box creation.

Don't forget to tell them to glue a tea bag inside. He can then decorate it with drawings, glitter, stickers...

A flower card with buttons or capsules 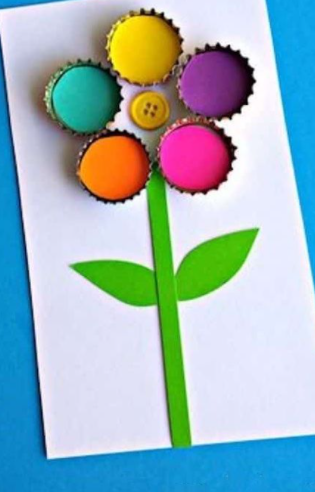 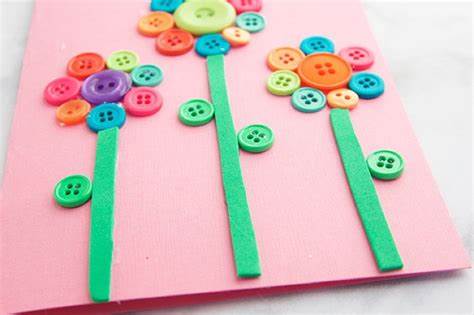 An ideal activity for the little ones, because it does not require the use of scissors, appeals to their creativity by mobilizing simple shapes, while allowing them to mix the colors as they wish!

Needed material to make this activity:

- buttons and capsules painted in advance

- green foam, if not green paper... or paper colored/painted green

Cut out your green foam, then glue it to the chosen color sheet. Ask the child to choose the buttons in the center first: they should be a little bigger than the others. Then they should glue them on, leaving enough space for the petals around them.

For the petals, they have to choose smaller buttons and of different colors, and then glue them. This activity engages both their senses and their imagination.

Don't hesitate to decorate the stem with green buttons, to represent the leaves of your flower! Let it dry, and it's done!

Of course, once the cards are done, they need to be embellished with a personalized note to their mother!